When Texas elected Greg Abbot to the position of Governor, I knew we were in for more years of stupidity, so here we go…

How come conservatives say they believe in things like States Rights, but then want to prevent communities from exercising self government?  If you follow what the modern far right believes, you won’t find any consistency, other than doing whatever their large corporate donors tell them to. 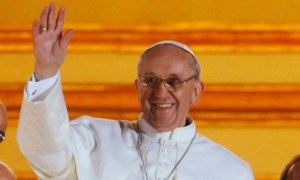 The Pope Edict On Climate Change

There is some good news on the climate change front this week.  Apparently Pope Francis is taking this threat to our civilization seriously.  He plans on making a strong statement on this issue in 2015.  The article above contains a a quote by Pope Francis that also concerns this issue:

“An economic system centred on the god of money needs to plunder nature to sustain the frenetic rhythm of consumption that is inherent to it.

“The system continues unchanged, since what dominates are the dynamics of an economy and a finance that are lacking in ethics. It is no longer man who commands, but money. Cash commands.

“The monopolising of lands, deforestation, the appropriation of water, inadequate agro-toxics are some of the evils that tear man from the land of his birth. Climate change, the loss of biodiversity and deforestation are already showing their devastating effects in the great cataclysms we witness,” he said.

What is especially great is that he really seems to get it.  This issue, and one of the reasons large corporations are trying to stall us dong anything about it, is tied up with economics.  The Pope also sees this issue as a moral one, which it is.  I can’t help but like this guy…

I am still knocking the cobwebs off this morning.  However, I came across this great article:

It’s about how hippies and libertarians are coming together over solar power. I’ve long believed that there are certain environmental issues, if treated correctly, could bring certain fragments of the right and left together.  I feel like language and cultural differences sometimes divide people who often have common interests.  This is a promising turn of events and I hope to see more of it in the future.  Keep your fingers crossed.  Pray to your god of favor.

One of the best books that I have read in recent years is Timothy Egan’s The Big Burn: Teddy Roosevelt and the Fire That Saved America.  It is a book about the biggest forest fire in American History.  It also deals with Teddy Roosevelt, Gifford Pinchot, and the men that fought the fire.

This book was a huge influence on my life.  It’s a great story in and of itself.  I really liked the way that Roosevelt talked about the environment.  He saw it as our common inheritance.  In America we don’t have the cathedrals or the wealth of art that they have in Europe.  The beauty of nature that we possess is our cathedrals.

This book was one of the factors, along with my Dad’s career as an environmental lawyer, and my girlfriend’s love and passion for nature, which led me to want to get an Environmental Science and Policy degree while I pursue music.   A few years ago I also started hiking in the Austin greenbelt on a regular basis.  I realized that walking out in nature I found a degree of peace that I hadn’t yet discovered.

The book not only is large in scope, but also includes all of the little interesting details that make it a page turner.  It talks about Pinchot communing with the spirit of a dead lover.  It also makes you understand what it would feel like to be in such a dangerous fire.  Teddy Roosevelt had a boxing ring and would spar with people in the White House.  These are the kind of things that fascinate you while you are being drawn into the larger arc of the story.

If you are looking for a good yarn I would recommend this book.  If you are interested at all in the environmental movement from a historical perspective I couldn’t recommend this book highly enough.  From the very start big money interests try to kill the movement in its grave.  It’s not hard to draw a line from what was happening then to what is happening now.

If I have any beef with the environmental movement it’s that it doesn’t do a good enough job of communicating in real world terms why it is so important to preserve nature.  I think if you read this book one can grasp a better way to convey to others what is at stake in our beautiful natural cathedrals.

In Denis Johnson’s Resuscitation of a Hanged Man there is an interesting question that is asked.  I haven’t read the book for years, but the general idea of the question has always stuck with me.  The question is basically would your younger self feel betrayed by the person that you are now?  Did you sell out or give up on your dreams?  Did you not become a person that they would be proud of?  One of the characters flips the idea at one point.  Maybe you should feel betrayed by your younger self.  They couldn’t possibly understand all that you have been through.  They made bad decisions that effected where you ended up.  Again, I’m largely paraphrasing, and one thing the older me surely doesn’t remember is the exact words that the younger me read!  However, I always found this to be an interesting question to ponder.

When I was in middle school we used to build tree forts out in the woods behind our local athletic fields.  This is where we, as young boys, would have our first conversations about girls.  We would smoke cigars and pipes and hatch plans of mischief.  There was something very Tom Sawyer about the whole thing, though that could just be through the misty veil of memory.  Most of my memories are very fond from this period.  Most of the people I hung out with then have remained good friends to this day.

I think all kids need time to test their boundaries.  It’s part of growing up.  It’s one way that you learn to be independent.  However, there is one incident that makes me cringe to this very day.  While we were gathering wood for our fort we had the bright idea to chop down trees.  Now I don’t mean that we were going to chop down trees and then use them for wood for our fort, although with the abundance of fallen trees around this still would have been senseless.  I mean that we just decided that it would be fun to chop down trees to watch them fall in the woods.

If I saw the younger me doing that I would slap some serious sense into him.  There is nothing more heartbreaking in this world than destruction of a living thing without reason.  Now there are some people reading this at this point that may say I’m being a little hard on my younger self.  There are others who will say that this is a touchy feely liberal attitude and there is no point getting worked up over a tree.  They will think that trees are here for us to use however we see fit.  It’s only one tree anyway and there are plenty of others to replace them.

But I think this kind of thinking is wrong, whatever your outlook.  Look, I consider myself a realist.  There are needs for timber.  I have no problem with responsible forest management.  We use trees for all kinds of things without which modern life would be quite unlivable.  As much as I love using my Kindle it is no substitute for a real book.  I love lodges in the North West and the idea of log cabins.  Sometimes there is nothing better than sitting around a wood fire with a bunch of close friends.

But I do think we should look at the natural world and think about what is necessary and what is not.  We should view trees with a sense of reverence and wonder.  In the Amazon forest it takes trees 60 to 100 years to reach maturity.  An 100 year old tree has been in the world since before WWI started.  Half of all trees in the Amazon rainforest that are up to 4 inches in diameter are up to 300 years in age.  This means that they have been around since before Revolutionary War.  Some are 1,000 years old.  That means that they were around since before Norman conquest of England in the year 1066, a year many school kids know as The Battle of Hastings!