The ESPN series 30 For 30, available on Netflix, is really great.  I think today I saw one of the best, if not the best.  It was called Ghosts of Ole Miss and it covered the undefeated Ole Miss football team of 1962.  More importantly, it also covered the bravery of James Meredith and the riots that ensued because of him being the first black student admitted to the University of Mississippi.

However, if this was just a documentary about history, I don’t think I would be writing about it.  (Even though it is a completely enthralling piece of filmmaking that covers a time period that many Americans would like to forget.)  For anyone that doesn’t understand the controversy surrounding the Confederate flag, or thinks that controversy is much to do over nothing, I think this is something you must watch.  The film is also great at providing the missing link between the Civil War and modern day problems dealing with race.  I also don’t think race is the only modern political situation this film is relevant to.  At a time when we are seeing local and state politicians try to stand up to the federal government on the issue of gay marriage, one can’t help but see their historical counterparts in this film.

There is also a positive element to this film.  Even though the film does not make the claim that all race issues are gone are settled in Mississippi, as they clearly aren’t there or anywhere else, the film does acknowledge that great strides have been made.  As dark as the history showcased in this film is, there is hope that, over time, people can change.

Above is a Rolling Stone article about the Philadelphia Eagles recent pickup of Tim Tebow.  It also talks about Eagles coach Chip Kelly.  I’ve never liked Tebow, but if he somehow helps the Eagles win, I’ll start praising Jesus too! (I’m a longtime Philadelphia sports fan.)

Last weekend while in a hotel I caught a segment on HBO’s Real Sports about the ’85 Chicago Bears.  The segment was about how football injuries prematurely turned a group of strong and charismatic men into shells of their former selves.  Even coach Mike Ditka said he would no longer tell kids to play football knowing what he knows now.  (Which is strange given that Ditka still humps it for the NFL doing game analysis.)

I grew up playing football and have always been a football fan.  I also am aware that no matter what you do in life, it takes some kind of physical or mental toll.  Life eventually makes monkeys of us all.  If I know nothing else, I know that.  However, I think this segment,  better than anything else I have seen, demonstrates the moral uneasiness surrounding modern football.  Is it possibly more like a match held in the Roman Colosseum than we previously wanted to believe?

As the Super Bowl approaches, I can’t help but wonder about this.  I have always know that football is absurd, and in fact that is partly what I love about it, especially at the professional level.  As George Carlin once observed,  “There is nothing better than watching 300 lb millionaires kick the shit out of each other.”  I think if nothing else though, having at least a conversation about the consequences of the game is probably a good idea.

10 Things America Does Worse Than Europe

I have been lucky enough to have traveled to Europe many times.  I felt in reading this article, based on what I have seen, that there is a lot of truth to it.  I have also been a lot of places where suggesting that America doesn’t do everything the best will drive people crazy.  That seems batshit insane to me.  It is like if you were on a really good football team and you saw another winning team in a different division.  Wouldn’t you try to watch them to see how they were winning, so that you could be even better?

The fact is that other parts of the world do some things better than we do.  Instead of being afraid of it we should try to learn from it and make our country better.  Being a self-declared champion is meaningless and delusional.

Hat tip to my friend Liza.

Looks like the Cowboys aren’t going to the Super Bowl.  I’m relieved that now I don’t have to pray to strange gods that the movie Black Sunday becomes real. 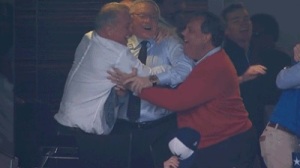 I saw the clip from the last Cowboys game where Chris Christie and Jerry Jones were celebrating.  At first I thought it was just an asshole convention, as Jones seems to have a who’s who of douchebags in his private box.  And for those of you that think I’m picking on Jones because I am an Eagles fan, I know many Cowboys fans that refer to Jones as “Skelator” and other less savory names.

But after a little bit I thought it strange that Chris Christie would as enthused as he was at the Dallas victory.  My mom is from New Jersey, I was born there, and I still have family there.  There are a good deal of Eagles  and Giants fans in New Jersey, being that the state borders New York and Pennsylvania and does not have a team of its own.  Most politicians, even if they are lying, don’t openly root for a team that doesn’t have regional ties.

But then I came upon this article:

The article also states, aside from the behavior alluded to in the title, that Jones paid for Christie to travel to and attend NFL games.  There clearly is something unethical going on, if not downright illegal.

While I was in Australia I listened to the Thanksgiving Cowboys/Eagles game online.  I obviously couldn’t get it on TV so it was my only option.  My dad is from Philadelphia and I’m originally from Pennsylvania, so I’m a huge Eagles fan.  Tonight I’m exhausted after four gigs in a row and a day in the studio.  It’s rainy in Austin, and I enjoyed listening to the game in Australia, so I thought I would listen to the game on the radio tonight.  I’m amazed at how much I enjoy listening to the games on the radio.  Watching them on TV is better, but I have to say that listening to them is better than watching them on TV without sound.  I can’t stand it when I go to a bar and my game is on, but it is not the one with sound on. At least for me I’ve realized that the sound of a game is just as important, if not more important than the visual side of it.

Postscript:  It’s amazing how much swearing mere sound can incite.