The link above is to a Cracked article that has clips from old horror movies from early in movie history.  The title is theirs.  However, I think the clips are interesting.  They are visually striking and some of them are quite artistic.  Plus, in looking at them you realize that there is this whole world of lost history out there, things that many people saw that you aren’t even aware of.  It’s like looking through a portal into another time and place.

This is actually lyrics to a new song that I just demoed, that I hope to bring out live shortly.  I was joking with my brother about how, once you were an adult and worked a shitty soul-deadening job, nothing that you were scared of as a kid frightens you anymore.  When you were sitting in an office or wherever, doing busywork, you would gladly have werewolf come busting through the front door dismembering people, even if you had to meet your end too.  A theory of mine is that the reason shows about the zombie apocalypse are so popular, is that so many people that work these terrible jobs actually secretly dream of it happening.  At least in the zombie apocalypse you can survive on your wits and get whatever you want in the store.  As I was joking with my brother he said, “The Night of a Thousand Tuesdays”.  Tuesday was always that day at work that you felt most defeated.  Even on Monday you still had a little of that spring in your step from the weekend.  That title, as we joked, was our fake idea for the adult horror movie that we were going to create.  I thought that would make a great song title at least.  Thanks brother!  And yes, I have worked many soul crushing jobs…

THE NIGHT OF A THOUSAND TUESDAYS 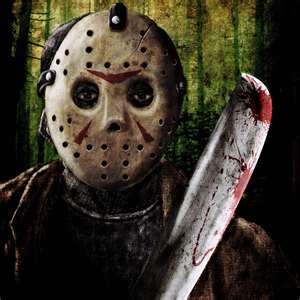 As Halloween approaches I am consistently reminded about what is really scary in life.  Freddy, Jason, zombies, vampires, ghosts, and the like, hold no more fear for the thinking adult.  Not when the likes of Ted Cruz is out there.  Someone like Jason functions on a kind of animal like instinct.  He’s predictable.  With Ted Cruz you never know what kind of frightening and illogical idiocy is next.

I’ve got to jet out to a rehearsal.  In the meantime, in honor of Halloween approaching, here is the Ramones video for Pet Cemetery.  I learned how to play guitar by playing along to Ramones records.  This movie used to also scare the bejesus out of me as a kid.  Alas, now I would gladly dance with the awoken dead of Pet Cemetery if it came between that and seeing Ted Cruz’s face one more time.

I’ve been looking up stuff on Twin Peaks ever since it was announced that it will be returning in 2016.  The scene above is interesting because Laura Palmer tells Agent Dale Cooper that she’ll be seeing him again in 25 years.  2016 will be 25 years since this episode aired.

But what also struck me was how unsettling the above imagery is.  I no longer find horror movies frightening for the most part, and for those of you that haven’t watched Twin Peaks is not a horror show in any traditional sense.  (It is a combination of genres that is really quite unique.)  There are some that are well done and suspenseful, but as an adult they don’t leave me with any lingering terror after I’m done watching them.  I used to be really scared of The Shining as a kid, but I watched it a couple years ago and found myself laughing at how insane and over the top it was.

However, David Lynch is a master of what is called the uncanny.  A definition of uncanny is:  strange or mysterious, especially in an unsettling way.

The uncanny is a feeling and feelings are abstract.  It can be as surreal as the imagery above or it can be a normal everyday thing that doesn’t quite add up.  Often in dreams it is never quite day and never quite night, and there is something haunting about this.  Lynch as a filmmaker, and the above imagery is not the best example of this, is able to create images that are more like real dreams than any filmmaker that I can think of.  It’s the combination of things that don’t belong together in a way that is troubling.  I think one of the many reasons why this show has remained fascinating for so many people for so long is there is something about the way that it affects our subconscious that leaves a lasting impression.

If you have been keeping up with my blog you know that I have been watching a bunch of horror movies to get in the Halloween spirit.  My brother and I were sitting around with question:  How come when you are an adult suddenly no horror movies are scary anymore?  We came to a conclusion, and it’s not the conclusion that you probably think.  It’s not because you suddenly develop reason and cease to believe in weird creatures of the night.  Even most kids know that stuff isn’t real, but the human imagination is a powerful thing.  It’s because there is nothing quite as scary as the mundane boredom of everyday adult life.  I would make out with Doctor Satan before I would gladly go to a meaningless job day in and day out.

With some of the bosses I’ve had, I have silently prayed for a werewolf to jump through my office window and rip my throat out.  Zombies might eat my brain?  If you have ever sat through a sales meeting you would realize that no zombie could be so efficient.  What about the Devil, which more Americans believe in then I would care to think about?  Give me a slip and slide to hell before you make me do telemarketing again.  The hotel in The Shining doesn’t look so bad when you haven’t had a vacation in six months.  My brother Ben came up with the scariest horror movie title of all:  Night of a Thousand Tuesdays.

After watching Creepshow 2, I decided I would go with something a little more modern.  I skimmed Netflix and put on Resident Evil.  That is what my instincts told me to do.  My instincts apparently have shit for brains.  I can’t tell if this is a horror movie, a spy movie, a kung fu movie, or what.  Usually the mixing and matching of different genres might lead to something interesting.  This is a complete and utter mess of the highest order.  Every time I look up it is like a different movie is on the screen.  This is what they should make people watch at USA terrorist black sites.  This will create complete cognitive dissonance.  A giant mutant dog just jumped through a window.  I’m pretty sure two scenes ago they were fighting a Chinese man with braids.

I’ve said it before, but anytime you create any kind of fantastical world, there has to be some underlying logic to it, even if it is dream logic.  Movies don’t need to follow the rules of our world.  However, they do need to have some kind of code of rules that the viewer can understand.  That is how believability of the fantastic is achieved.

Wait a minute, she just flying jump kicked a mutant zombie dog through a window.  Maybe if I was high this would be the greatest movie ever made.  Alas, I am not.  Bedtime for Bonzo.