The other night I watched Oliver Stone’s W. for the first time since it was in theaters, his film about George W. Bush.  There is that old saying that comedy is tragedy plus time.  The farther we drift from those years the more they seem like some kind of strange absurd comedy.  (And yes I am fully aware of the real tragedies that were part of those times.)  Like when you study the horrors of medieval times they almost appear like a Monty Python comedy.  I think people will look back on that point in our history with disbelief.  How did we knowingly choose to put a man like that in charge for two terms?  Why did we invade a country that posed no threat to us?  It was baffling then to many and even more so now.

If you lived through those years the movie might seem too light for what actually went on.  However, if you view it in a detached way, as someone looking back who didn’t live through them would, I think it emotionally reflects how those times will be viewed.

I’ve also, as stated, been watching House of Cards lately.  Given some of the problems with the third season, I still think it possesses interesting ideas.  Combined with watching W. is the idea that our leaders our just people, no different from us.  They may have better luck, family ties, or ambition, but at the end of the day they are humans.  It is only ritual and stage craft that gives them their power.  We are all part of a play.  The power they possess is only in direct accordance with how much power we believe that they have.  In the show Deadwood there is the idea that history is, “a lie agreed upon.”  There are rules and traditions that create the perception of order and therefore create order itself.  It is the belief in these fictitious sets of principles that holds it all together.

To close, I quote Twin Peaks:  “We live inside a dream.”

Day 3 in Louisiana – Headed towards New Orleans.  Due to the weather that has been going down, the countryside looks like West Virginia in winter, without the allure of the mountains.  “Slate grey Victorian skies” hang over leafless trees.  Cigarette butts and plastic bags dot the landscape all too frequently.   I have been reading Dante’s Inferno and listening to Lou Reed’s Sally Can’t Dance.  The soul is a flexible thing.  Mine is mirroring the landscape, slithering to the rhythm of the haunted South.  One of my favorite quotes of all time is from Oliver Stone’s Nixon.  “Nixon is the darkness reaching out for the darkness.”  Another is when Lou Reed said after making Berlin, an album many deem the most depressing of all time, that he was, “just having fun.”  That is the key and secret code to unlock it all: fun…

Last night I watched The Wolf of Wall Street for the second time.  I probably enjoyed it even more this time as the movie has so many great performances and scenes.  Even many of the actors that are in the margins of the movie shine.  The movie is long and dense, so I still don’t feel qualified to give it a proper review.  However, there were a couple interesting ideas that I picked up on.

I think it is good that the movie didn’t try too hard to judge the characters.  Oliver Stone’s Wall Street, a great film in its own right, was a condemnation of the kind of behavior that took place on Wall Street in the 80’s and it still ended up serving as inspiration for modern day traders.  The Wolf of Wall Street documents the decadent and depraved nature of its characters, but for the most part it stops at documentation, and doesn’t try to relay any heavy moral message, as that hasn’t really proved effective in the past even when it is extremely well done.

I can’t help but view The Wolf of Wall Street as a comedy about the absurdity of capitalism.  These people are entirely despicable, in every way possible, yet these are the people that run our world.  In the beginning of the movie the working class is portrayed as “suckers” by these people for not having what it takes to get ahead.  Even the other rich, anyone that dares trust these people with their money, are laughed at and mocked.  This movie paints our whole capitalist system as some kind of perverse joke.  One of the most telling scenes in the movie is when Jordan Belfort, Leonardo DiCaprio’s character, changes the name of his company to Stratton Oakmont to give it a respectable old money waspish sounding name.  Respectability is nothing but an illusion used to steal money from the “suckers” of the world.

But again this movie treats these people as animals in the zoo.  They are not so much treated as bad guys, but as a strange species that we allow to roam, to the detriment of all.  They make a mockery of our society, because we let them.

The truth is never simple and yet it is. The truth is we did kill him. By silence we consented… because we couldn’t go on. But by Ares, what did we have to look forward to but to be discarded in the end like Cleitus? After all this time, to give away our wealth to Asian sycophants we despised? Mixing the races? Harmony? Oh, he talked of these things. I never believe in his dream. None of us did. That’s the truth of his life. The dreamers exhaust us. They must die before they kill us with their blasted dreams.

– The character of Ptolemy in the movie Alexander

I was reflecting on Lincoln and other great men today, like Martin Luther King, and was wondering why so many of them seem to be the ones we kill.  I remembered this quote from the movie Alexander, which is one of my favorite movies of all time.  One of the themes at the end of the movie is that we kill the dreamers.  In aiming for a better world, the dreamers ask that the rest of society give up some of the things they are accustomed to.  Even if it is for the better of all, this is rarely met with enthusiasm in some circles.  Why do we kill the dreamers?  In the end, I do not know completely, but it is worth reflecting upon. 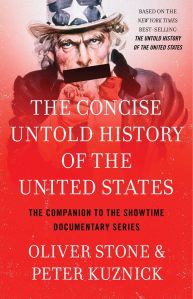 I read the Oliver Stone and Peter Kuznick book The Untold History of the United States.  They have now released a companion book, that is shorter and more closely follows the TV series.  It is called The Concise Untold History of the United States.  The difference between the two books as Oliver Stone explained on his Facebook page:

“Concise Untold History” was released last week. At 306 pages, it faithfully renders the text of the 12-hour series. The original 618-page edition, with 90 pages of footnotes, is really closer to a primer that substantiates the details presented in the film.

I am particularly passionate over this ‘Concise History,’ and find it poetic in keeping with the spirit of the series. It’s a light-weight paperback that can easily be carried around.

I was really impressed with the first book.  I was a History Major and eventually graduated with a degree in American Studies.  I have seen at least some of the information that Stone and Kuznick wrote about corroborated in other sources.  I  don’t normally like to recommend a book I haven’t read, but if you are at all interested in what they have to say, but feel a little daunted in a 600 plus page book, this seems like a good place to start.  From what I saw of it the series was excellent as well.  After reading the first book and seeing about half of the series, I feel pretty safe saying this would be a very interesting read.

Right now one of the several books that I am reading is L. Fletcher Prouty’s JFK: The CIA, Vietnam, and the Plot to Assassinate John F. Kennedy.  Prouty was the basis for Mr. X, played by Donald Sutherland, in the Oliver Stone film JFK.  Prouty is a controversial figure, as one can imagine, given the fact that he believed in a conspiracy in the JFK assassination, amongst other things.  If you look him up on the internet you will see him praised as a hero and called a sham.  I think there are very interesting ideas in this book that are very credible, especially regarding our reasons for getting involved in Vietnam.  I also feel there are times he makes bold claims which he does not back up.  He often talks about a High Cabal of money men that are making decisions for the country, but he never backs up this claim in any substantive way.  I haven’t even gotten to the JFK stuff yet.

The reason that I bring up this book is that I believe that when we are reading, that we always read with a hyper critical eye.  I think reading in general is positive.  I think you should purposely read things from a wide variety of perspectives.  I think Ayn Rand is batshit crazy, but I still read The Fountainhead.  Even in a book so full of asinine theories, there were small moments of truth.  All humans, no matter how flawed, are still possible of revelations.  Also, even the best writers have biases and blind spots.  Even if you are reading for escapism, you should occasionally reflect about what the author’s aims are and if they hold water or not.

However, life is short, and you do not want to spend too much time out in la la land.  You cannot possibly read every book.  You need to pick and choose your battles.  Occasionally though, you should venture out into strange territory and try out some new ideas to make sure that life is never too safe.  Just make sure you are thinking when you do so.

The only exception is when you are reading this blog.  I have clearly descended from some all-knowing space god. My aim is true.

Last week I had a friend tell me while collecting SXSW wristbands that he wanted to call in an airstrike.  The character Captain Harris in the movie Platoon, played by Dale Dye, orders an airstrike on his own position once it is overrun by the Vietcong.  One of my favorite sayings when things get absurd or bleak is that I would like to, “Call an airstrike in on my own position.”  I think more people should use that as I am sure that we have all felt like that at times.  I just hoped to provide you with some happy thoughts if you were at work on this fair Tuesday morning.  Enjoy.