What the Police Said Before the Walter Scott Video

The above link is to a Think Progress article about what the police said in South Carolina before the Walter Scott video was released.  I think this is really important, because it sounds like so many statements the police have made, about cases which we have heard before.  Anyone can watch the video of Walter Scott’s shooting and know something is horribly wrong.  (An unarmed man was shot in the back and died.  If you don’t think that is wrong, there is something else going on in your judgment of the situation.)  I have talked before about how more people were killed in the U.S. by police in March than in England since 1900.  When you see anger in places like Ferguson, it is because of things like this.  Again, I don’t think you can just blame the police for situations like this.  There is a whole list of historical and cultural factors involved here.  Hopefully though, this video will be our dogs on the bridge moment, which was when violence against protestors in Selma woke Americans up to the cruelty of segregation, the moment when the majority of America can no longer ignore what is being done in its name.

I mean, read the article.  That statistic really says it all.  The United Kingdom has gone through The Troubles in that time period.  Two World Wars took place in that time period just across the channel, with bombing taking place in England, which one would imagine would raise suspicion.  England has its own problems with immigration.  I’m sure many of you have heard of the National Front, of soccer hooligans, of many problems.  What I’m trying to say is that it isn’t like the UK is a land of peace and tranquility.  Yet somehow their police don’t kill people at the rate ours do.

I give a lot of grief to police here at this blog.  Just on my way home from Florida on the last tour I ran into an exceptionally kind one who let me off for speeding without a ticket.  I don’t believe all police are bad.  I’m not saying this to balance my argument or to extend an olive branch.  I think we have a problem here, but I think it is complex and it is better to acknowledge that complexity rather than to just say police are bad.  It has to do with our culture, our history, our unique racial problems that go back to the origins of this country, our politicians, our military industrial and prison complexes, and so many other factors.  But as a country we must find the result unacceptable.  It’s time to start asking some hard questions and beyond time to make changes.

The Guardian has just put out an article, one which Huffington Post is also headlining with, that claims that there is a secret black site used by the Chicago Police to interrogate U.S. citizens.  This site is being compared to CIA black sites that are used overseas in the War on Terror.  I find this scary, but not surprising.  This seems to me to be the endgame of years of fighting a war in which the boundaries haven’t been clear.  All throughout our War on Terror our police here at home have become more militarized.  A lot of the gear that has been used overseas in the War on Terror has made its way stateside.  There are also tactics that have made it home from these wars.  But while soldiers main job is to subdue a hostile population, unless they are on a peacekeeping or humanitarian mission, the police should be working alongside the community.

I think that there are two additional things one should keep in mind.  The first is that there is a history of law enforcement abuse in this country.  A great place to read about this is in Tim Weiner’s book Enemies: A History of the FBI.  Obviously there is a difference between the Chicago Police and the FBI.  However, both are domestic law enforcement, and the book will give you an idea of how those in power abuse the law for political purposes.  The other book that I keep recommending is Matt Taibbi’s The Divide: American Injustice in the Age of the Wealth Gap, a book that examines the way that justice is applied differently to people depending on their economic background.  I think the fact that there is a history of abuse is important.  J. Edgar Hoover often punished people he viewed as “communists and subversives”.  (left wing)  If you know that history and combine it with what Taibbi says about modern times, while looking at this new information in light of the overall War on Terror, it’s not that hard to see how we ended up here.

The police in Pasco, Washington have killed more people in the past six months than the police in all of the United Kingdom in the past three years and the police in Germany in close to a year.  This is despite the fact that Pasco has 59,000 people and those countries have roughly 80,000,000 people.

I think when you look at something like this you have to go outside of even examining the police, though our country without a doubt struggles with issues of police brutality.  (The article says that at least one of those show was unarmed.)  What is it in our culture that leads to more violence than in other Western countries?

Hat tip to my friend J.R.

The NYPD Turns its Back On Civilian Control

I’ve put up some posts recently about the problems going on in NYC between the Police Union and civilian leadership, as I think this issue, in light of many other things in the news concerning our justice system, is part of a larger conversation.  Above are some reactions that Andrew Sullivan has gathered at his blog The Dish, one of the best blogs around.  A sample from Damon Linker:

It is absolutely essential, in New York City but also in communities around the country, that citizens and public officials make it at all times unambiguously clear that the police work for us. … When police officers engage in acts of insubordination against civilian leadership, they should expect to be punished. Just like insubordinate soldiers. The principle of civilian control of the military and police depends on it.

It also depends on cops who kill unarmed citizens being tried in a court of law. And on cops respecting the right of citizens to protest anything they wish, including the failure of the judicial system to hold police officers accountable for their use of deadly force in ambiguous situations. All of this should be a no-brainer. That it apparently isn’t for many police officers and their apologists in the media is a troubling sign of decay in our civic institutions. 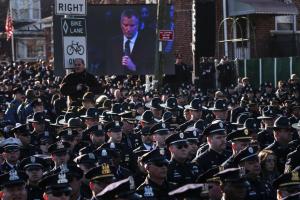 The NYPD’s ‘Work Stoppage’ Is Surreal

Above is a great article by Matt Taibbi over at Rolling Stone.  He talks bout how the NYPD, in their work stoppage protest in anger over comments made by NYC mayor Bill de Blasio, are actually giving those that are protesting the police what they want.  Some of them are claiming that they will arrest people, “only when they have to.”  They will not be enforcing petty violation in order to cut the part of the NYC budget that is gained from these violations.  This punishes the mayor as he will not have as much of a budget to work with.  However, many of these small violations, which are the result of a kind of policy known as Broken Windows, is actually part of the reason so many residents of NYC and other cities are angry with the police.  Taibbi, who wrote a great book called The Divide about the injustice of the criminal justice system, knows these issues well and has great insight on this topic.  Definitely an article worth reading. 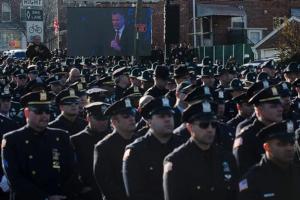 Cops Turn Their Back On New York City Mayor

Police officers have again proved that they don’t get it.  One can think that the justice system is out of control, that too many young black males have lost their lives or have been sent to prison, AND that cops shouldn’t be killed.  However, they are turning their backs on people that are peacefully criticizing what some of their officers do.  Instead of realizing that there might be a problem, starting an open dialog, some of these officers are blaming people that are reacting peacefully when officers have overstepped their bounds, and blaming those people for violence.  It is some of the police, and definitely the police killer, that have violence problems.

A police force’s only reason for existing is to protect and serve the community.  This means protecting free speech and the right to assembly as well.  They should recognize that as long as protestors don’t get violent, they are exercising their rights as American citizens.

Anyone with two eyes can tell you that are justice system is completely flawed.  Although we only have 5% of the world’s population, we have 25% of the world’s prison population.  Unfortunately, even the many police officers that are good people, are part of a bad system.

Instead of trying to protect the community, joining with the protestors to request a more fair justice system, that doesn’t put them at odds with their community, they are closing ranks.  They are learning nothing.  I once read that a comedy is when a hero goes to the innermost cave and learns nothing.  If there wasn’t so much sadness surrounding this issue, this would indeed be an absurd comedy of the highest order.