Allergies in Austin have knocked me out of commission the last few days.  For any of you who are thinking coughing and sneezing, I hope you are not asking me to laugh in your face.   It’s more like someone is injecting one with Nyquil, but a brand of it that is actually increasing your cold.  I sometimes wonder if my conspiracy-theory friends are right about the government and chemtrails.  Anyway…

The Walking Dead is the best show on TV right now.  (At least until the return of Mad Men.)  Describing why would take a whole series of posts, but a lot of it has to do with the fact that week after week it pushes the limits of what you can do with characters in long form writing.  Breaking Bad, which I love, took Ned Flanders and turned him into Scarface, but this has done that for almost an entire cast.  Meanwhile, while you knew Walter White was crossing a line that shouldn’t be, with the rules of society gone out the window on The Walking Dead, you don’t know whether the characters are people that should be rooted for or feared.  The show has a moral complexity to it that I find really interesting.  It looks at human nature outside society in the same way that a novel like Lord of the Flies does.  As a bonus, it is flat out entertaining as hell!

I’m watching Better Call Saul right now.  I’m still on the fence about this show.  There is a lot to like in the performances and the details of the writing.  However, the show still feels like it is building towards something, that it hasn’t arrived yet.  I’m going to stick with it as I trust Vince Gilligan, also the creator of Breaking Bad, will pull it all together.

If anyone is interested in South African Music, I can’t recommend the compilation Homeland: The Best of Black South Africa enough.  It’s one of those rare compilations that plays like a really great album.  Every track has a commonality that feels related to the others, but the diversity of artists means that it also never gets boring.  I clearly can’t understand the lyrics, but this is soul music, in the sense that it is uplifting and life-affirming, even if you get the sense that it was created under hardship.

This week I go on the road with Shinyribs to Florida for a festival.  You can get the details here:

I hope to be back up at my usual posting rate by tomorrow, but if I’m not, you know why.

The hour is getting late, but I wanted to mention that tomorrow I will be going on tour with Shinyribs in the great state of Louisiana.  The above link is to the Shinyribs tour page featuring dates, venues, etc.

The new Shinyribs album will be out soon.  Tonight I just heard the final version of it for the first time, so I know that it does indeed exist!

I am bringing my computer with me so that I can blog from the road.  Posting has been slightly slow the last few days.  This is partially due to the fact that I am making some structural changes to Windup Wire that I need to make.  I will comment on those  soon enough.

Going on tour this weekend with Shinyribs.  I’ll be in Fort Worth tonight, Oklahoma City tomorrow, and Dallas On Saturday.  For details go to:

I’m bringing my computer so that I can keep posting at a regular rate.  Today may be a little slow as I am trying to get ready to go on the road with a crushing hangover.  Life!

If you read this blog on a regular basis and want to say hi and talk about a certain topic or issue, please do.

I wanted to remind anyone in the Austin area that I’ll be playing a solo show along side Kacy Crowley at Strange Brew this Wednesday.

My partner in crime Alex Moralez will be joining me on percussion.  Both of us will also be backing up Kacy. Strange Brew is one of the best sounding rooms in Austin.   Tickets are only $6.

The Shinyribs band will also be up in McKinney and Huffman this weekend.  You can get more info at: 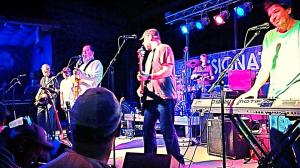 Starting this Wednesday I am going on tour with Shinyribs.  We will be in New Mexico, Colorado, and Texas.

Usually when I go on tour, mostly due to lack of service, but also from trying to type things on my phone, and sheer exhaustion, my blogging input decreases.  One thing I am going to try to do on this tour is to post some kind of poem every day based on what I see on the road.  There may be a day or so without service, but if that happens I’ll just post two the next day or whatever.

Lately I’ve been posting poetry, which until recently I have never written before, although I have written plenty of song lyrics.  I don’t even feel comfortable calling it poetry as I have no experience in that field.  I think of it more as prose in verse form.  There is something Zen about it for me.  I enjoy trying to write something that translates some kind of image or idea without all of the explaining that comes with writing prose.  I’m having fun with it.  Hopefully you all will enjoy some of it as well.

Just got to Chicago,  scene of the first gig of the Shinyribs tour.  You can check out dates at http://www.shinyribs.org. &nbsp; In the meantime I thought I would share this article from Salon.

We are a corporate theocracy now: The Christian right seeks cultural and political domination http://www.salon.com/2014/07/03/we_are_a_corporate_theocracy_now_the_christian_right_seeks_cultural_and_political_domination/ via @Salon

From the ice-age to the dole-age
There is but one concern
I have just discovered :

As Anthony said to Cleopatra
As he opened a crate of ale :

Some Girls Are Bigger Than Others by The Smiths.  I need to do some homework and start packing for my tour.  I am heading out with Shinyribs tomorrow evening for the West Coast.  This just seemed a good way to end the day…see you in the future…